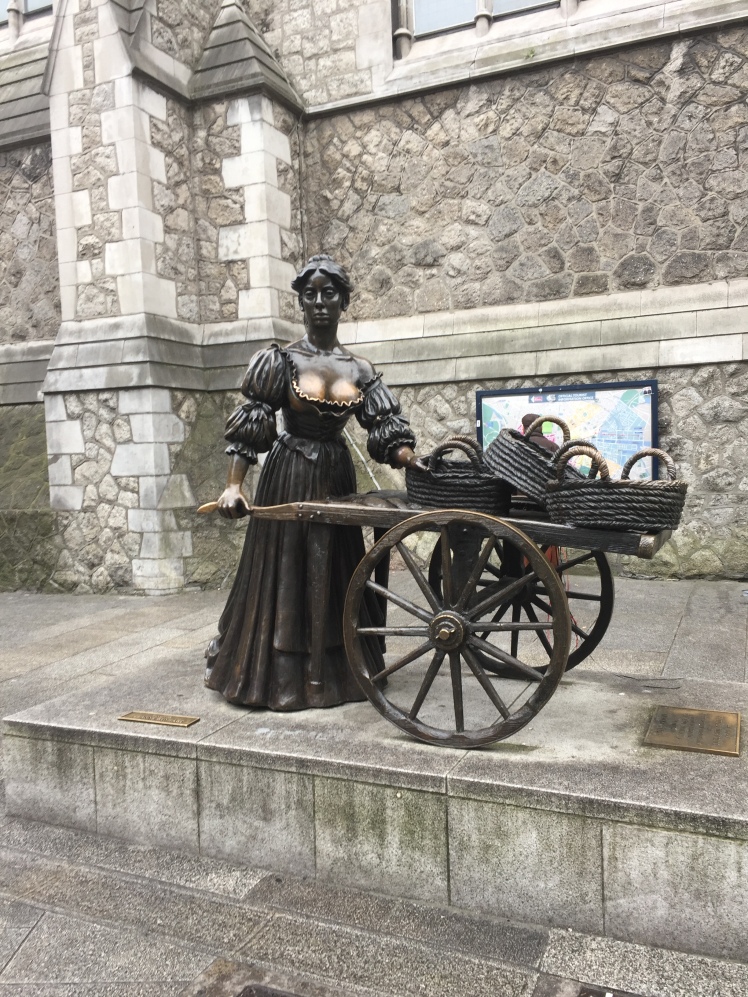 Contrasting to my first two days in Ireland, my last two were spent in the capitol city of Dublin. Dublin is a city packed with history and charm, and just like Edinburgh was small enough to be able to traverse easily in a day. I stayed at a hostel downtown, which I loved because the area was already decorated for Christmas. 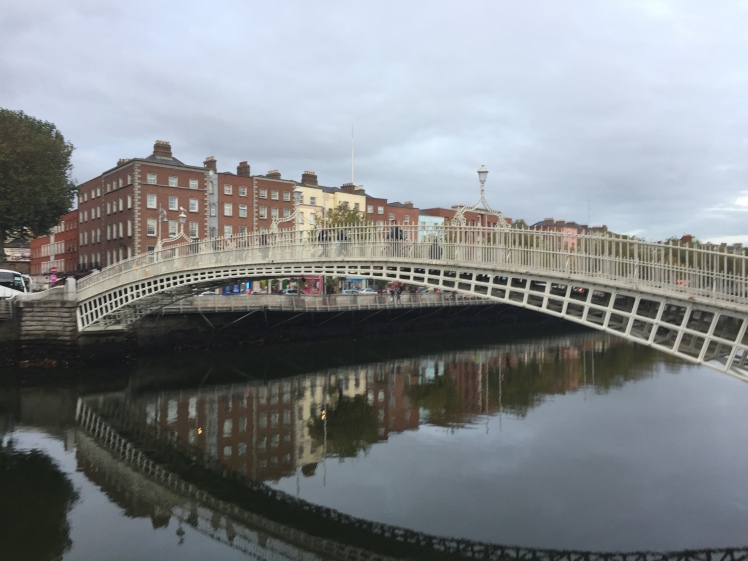 For me, Dublin’s main draw is Trinity College, which, looking back, I spent far too little time at. I started my own visit to the city with a short student-led tour, which included entrance to the famed Long Room Library and the Book of the Kells. At large, Trinity College is the sister school of Oxford and Cambridge. It was the first of the three to give diplomas to women, and if a woman studied for a degree at Oxford and Cambridge and couldn’t graduate (based solely on gender), she could come to Trinity and get her diploma there. Interestingly, the man who signed that decree into university law was completely against it and said “women will graduate Trinity over my dead body.” His veto was overruled, and he died of a heart attack two months later, with the first class of women college graduates getting their diplomas that winter. So they really did graduate over his dead body! Careful what you wish for, mate.

After a brief description of the various buildings, scholarships, and statues around the school, we were (finally) dropped off at the library. Apparently I was too eager because I assumed I could just go straight through (I already had the ticket after all), but they sent me back to queue behind other non-ticket holders. At last, I made it to the exhibition room to see the Book of the Kells, but I didn’t stay too long, #1 because there were a lot of people around, and #2, I was too excited to go upstairs to the famed long room. 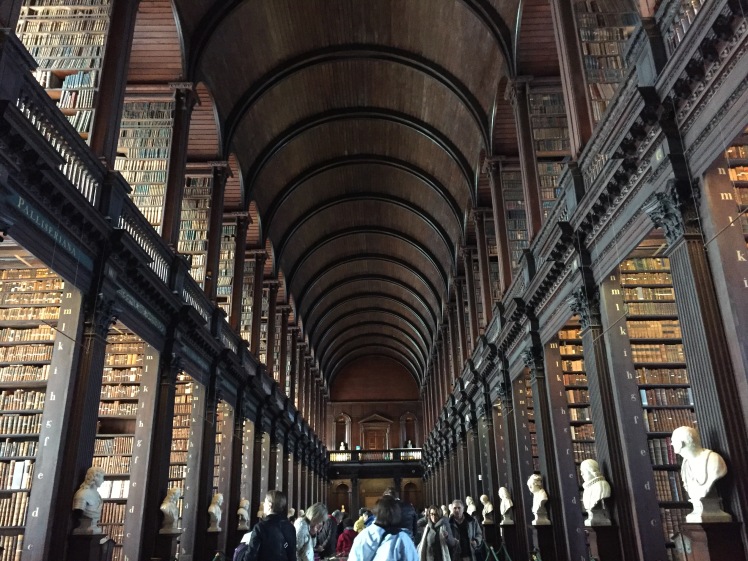 I walked round the room twice, once for pictures and once for memories, and then went out to brave the cold again. When I was in Galway I had thought about getting an Aran Island wool sweater, but the prices kept me from doing that. However, as I traipsed about the western and southern sites in Dublin, I knew I need something warm. I stopped into one of those tourist shops and found a hat that was actually knit with the same wool as the sweaters, and it’s been a rare moment over these last few days that I haven’t worn it. A good use of 12 euro, in my opinion.

Wednesday was my literary and bookshop visit day. I did not take many photos because they were all small, locally-owned places, and I would have felt awkward, but I did get a few of Sweeny’s Apothecary. James Joyce’s Ulysses has brought a lot of literary tourism to the Emerald Isle, as well as WB Yeats’s poetry and Oscar Wilde’s plays. There is a bookstore and pub in operation solely because of Ulysses – “Sweeny’s” and “Davy Byrnes.” Davy Byrne’s actually where I tried Guinness for the first…and probably last time. 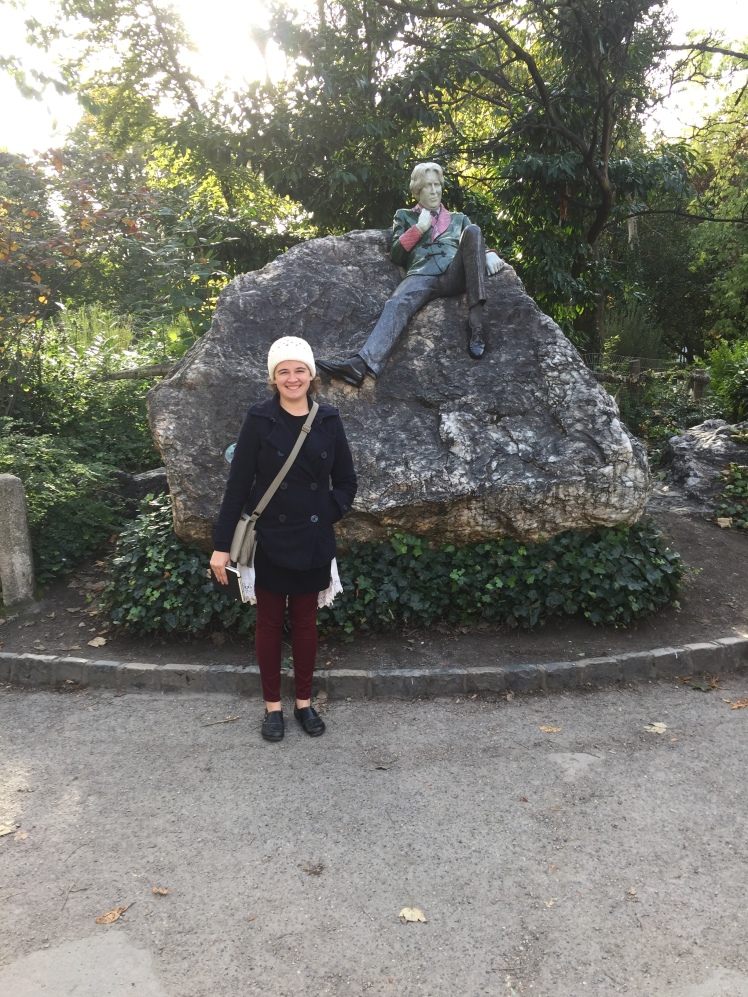 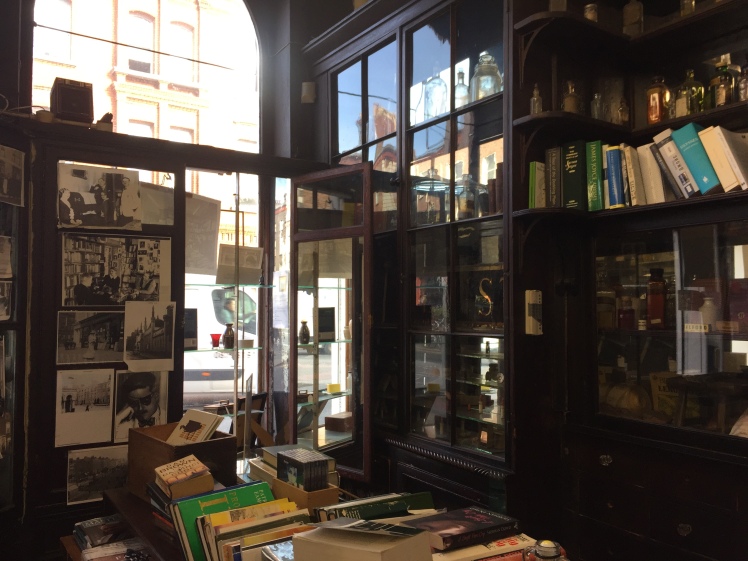 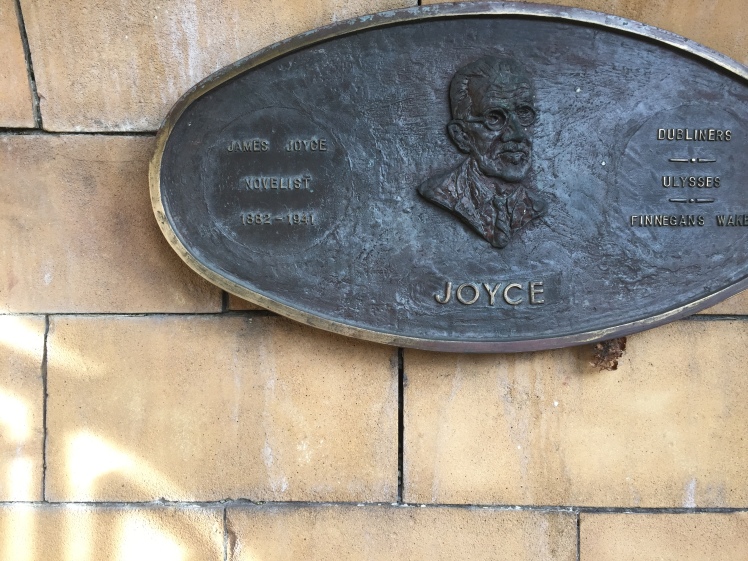 The same day, I also visited St. Patrick’s Cathedral, Chester Beatty Library and Dublin Castle, the National Library of Dublin, a shopping district, and Papa John’s…which I say is because I could eat the same food the whole time (cheaper than multiple meals) in Dublin and not because I was missing American fast food. 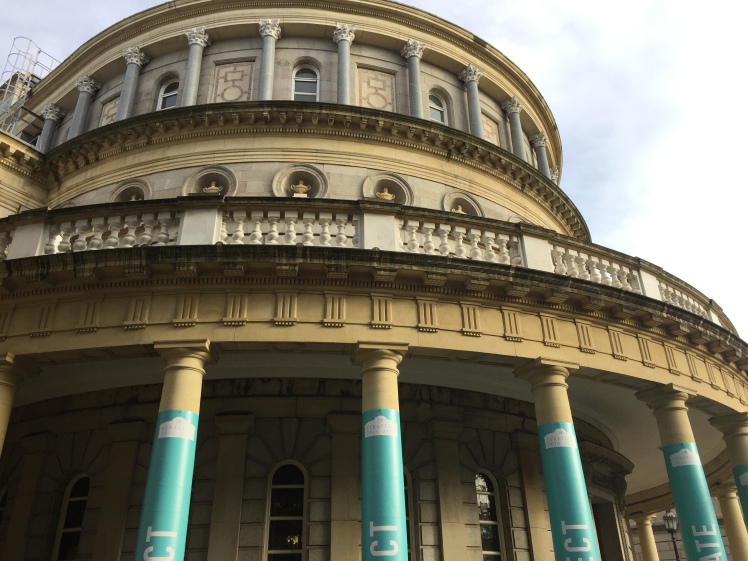 Thursday, my last day in Dublin, was a bit shorter because I wanted to get an early night – the plane was taking off at 6:10 the next morning!). My first and most important stop was the Dublin Writer’s Museum, showcasing the famous Irish and Dublin-born writers of history and today. I loved the building it was housed in, an old Tudor-style townhouse. 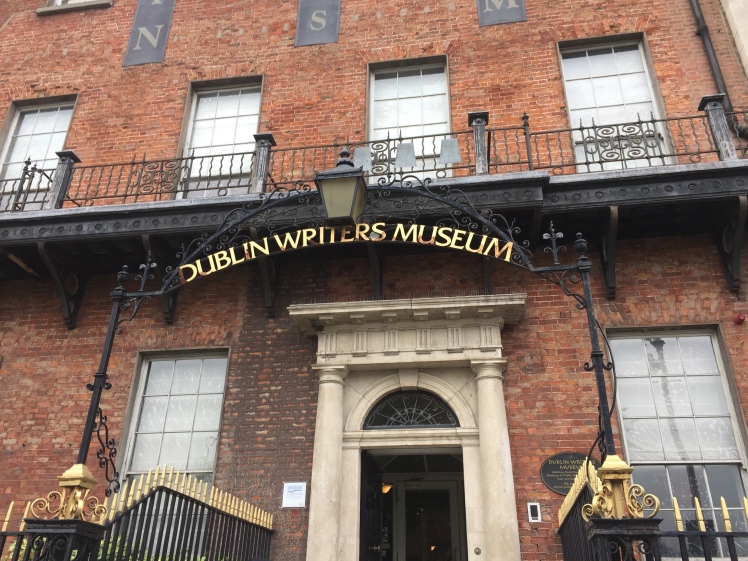 After the museum I took the longest and most turned-around way to get to Christ Church Cathedral. My google maps kept pointing me in a certain direction, but then when I would check in again, I would be blocks away in a completely different direction. Eventually I resigned myself to just holding my phone as I walked, even though it marked me as a tourist. I did make it, though the inside was not as impressive as I imagined it to be. I think after a while, many of these churches start to blend together.

My last stop of the day was to Phoenix Park – a park way out of the way compared to my other destinations of the trip, but a nice one nonetheless. It was too cold and damp to stay for long though, so I started back towards the hostel, knowing this would be my last bit of time in Dublin for a long while. Also, remember my Argentinian grandmothers from Giant’s Causeway? I saw them again! 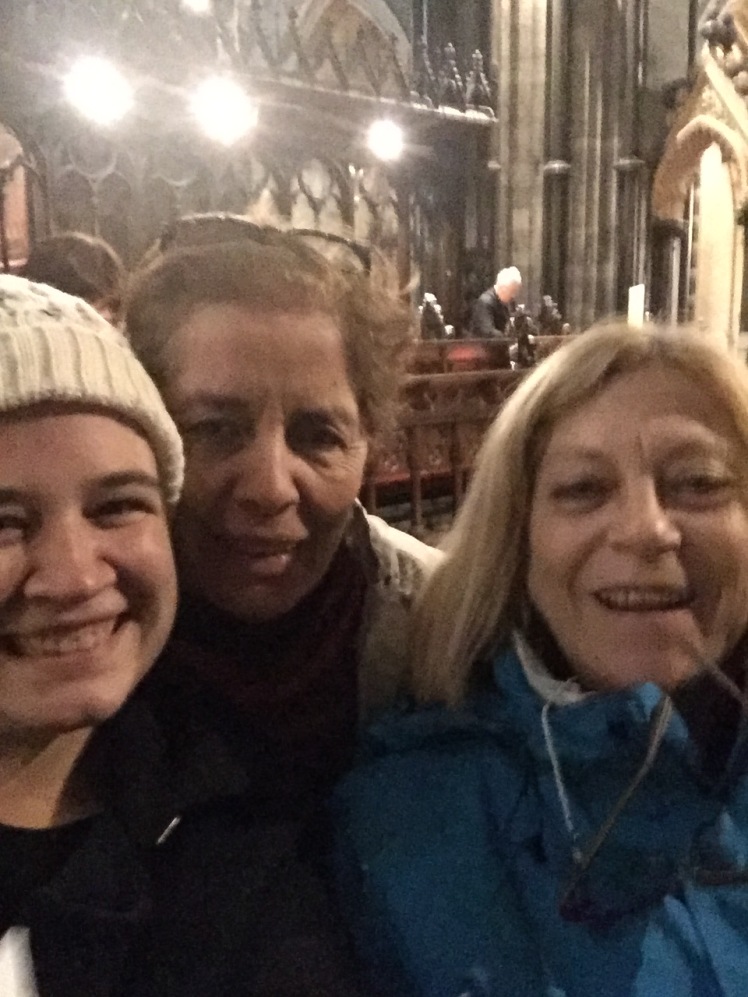 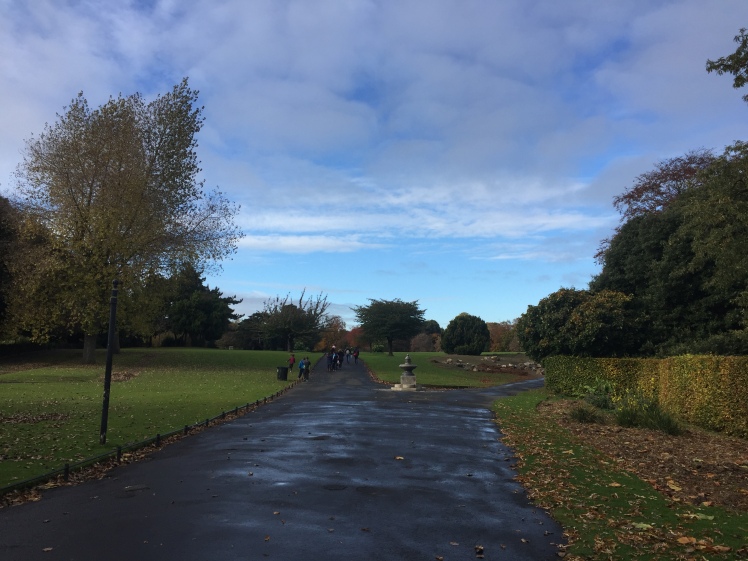 I really did enjoy the city of Dublin, but I think the entire Irish trip was made by my first two tours of the countryside. I think anyone planning a trip to Ireland needs to remember just how beautiful the country is, and for me, I would have been content to stay in the outer villages and cities if it meant more time hiking and climbing, and spent even just a day in Dublin. However, if you are literary inclined like I am, there are plenty of bookstores, museums, and exhibits set up for people just like you and me.