It’s amazing how much can happen in just 14 days. It would be too long and boring to list everything, but I have a new home! Four days ago, Louisville, KY welcomed my fiance Henry and me into its warm and sticky embrace. I’m nervous because it’s only May and already over 90 degrees in the afternoon, but I’m sure I’ll get used to it. What I may not get used to is the electric bill. 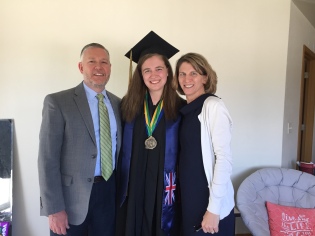 Two weeks ago almost to the day, I graduated from St. Norbert College with a Bachelor’s degree in Education and English. It was a wonderful day with family, friends, and colleagues! It’s now officially the start of my career as a teacher and writer.

In the following days, we took our engagement photos with Abbie Potts back in De Pere. It was nice leaving campus knowing I would be back in just a few days, and I was able to say good-bye to a few friends I had missed on graduation day. The photos were taken at Pamperin Park – and we’re excited to see them hopefully in the next few days!

The biggest worry we had was finding a car that we could use. The 2003 Honda Accord I had driven since I turned 16 had also driven me to first grade – and it had as many problems as a car with that grand old age warranted. The car had never had a working radio as long as I had it, as well as no AC. At the time of trade-in, somehow three dents or holes ended up in three of the four corners. We ended up finding a sweet Subaru with a huge trunk (perfect for filling with classroom materials), power steering, and even an AC.

Speaking of classroom materials, once Henry found a job in Louisville I started looking closely at the area. After years of long distance, it’s great to finally be in the same city! I had three unsuccessful to semi-successful interviews after applying to around two dozen teacher positions. I wasn’t jazzed about many that I looked at until I started researching one school in particular – Shelby County High School. I probably read their website for a good four or so hours, looking at everything from calendars to professional development programs. It’s starting some amazing and progressive initiatives focused on self-paced education and student cooperation. I’ll talk more about self-paced learning and project-based education in a future post. I was nervous about the interview because I wanted the position so much. In the end, they called me back within a few minutes and offered me the job! I will start as an 8th grade English teacher this August, so you can look forward to me chronicling those adventures here as well.

Moving down to Louisville with all our things was a hassle, but we broke it up with rests along the way, lunch in Indianapolis with some friends of ours, and then eventually ended up in our new town. It took several hours to unload and eventually return the U-Haul, but ended it sweetly with shared pizza.

Since move-in day, I’ve unpacked, organized, and even managed to spend some time writing. Henry and I took a walk downtown to check out the riverfront and local attractions. We’re looking forward to seeing what else the city has to offer!

Have you ever been to Louisville? What should we check out now that we’re here?