“So you have been here one week, and already you have decided to take an Arts degree from Redmond College?” – Aunt Josephine to Anne in Anne of Green Gables

I have been abroad for one week now. I have taken ferries, trains, trams, busses, and a taxi. I have ordered wine in a restaurant and sent postcards home. I’ve taken so many pictures I will have to delete some on this blog as I go because I’ve already used 20% on my space. I could not be happier.

My time in Germany was incredible. There’s really no other way to describe it. I stayed with two exceptional people, walked around two amazing towns, and ate foods that made me reevaluate why I live in the United States in the first place.

Allyson – my host and friend – and I worked together at the Plymouth Public Library when I was but a wee sixteen-year-old who made awkward conversation and knew nothing about life. Thankfully, Allyson took me under her wing and helped transform me into the awesome person penning this piece. Honestly – it was probably seeing her go to Germany two years ago that I realized I did want to travel. Up until meeting her I was quite content to just stay in Wisconsin forever. So Allyson, thank you.

I crashed with her and her food-loving, Princess Mononoke-adoring, space-crazy fiancé, Daniel. After Norway, it was refreshing to have good conversation coupled with good food. And I did I mention they’re adorable?

I mean, just look at them.

The morning after I arrived, I took the train by myself to Marburg, Germany, where the Brothers Grimm famously went to school and supposedly wrote many of the fairytales we know today. It’s not surprising, Marburg is just the place for romantic and fantastical things to occur.

I toured St. Elizabeth’s Church in the lower part of town before heading up to “Obershtat” (sp), where the castle and shops are and the Middle Ages seem to have frozen in time.

I could not go into the castle, but the outside was magnificent.

After walking, I spent about 90 minutes sitting in an outdoor cafe drinking “Apple Wine spritzed with sparkling sweet water (or maybe Sprite, who knows),” and eating pasta. Watching the crowds walk past while just relaxing in the sunlight is something I NEVER do at home. But it was wonderful. 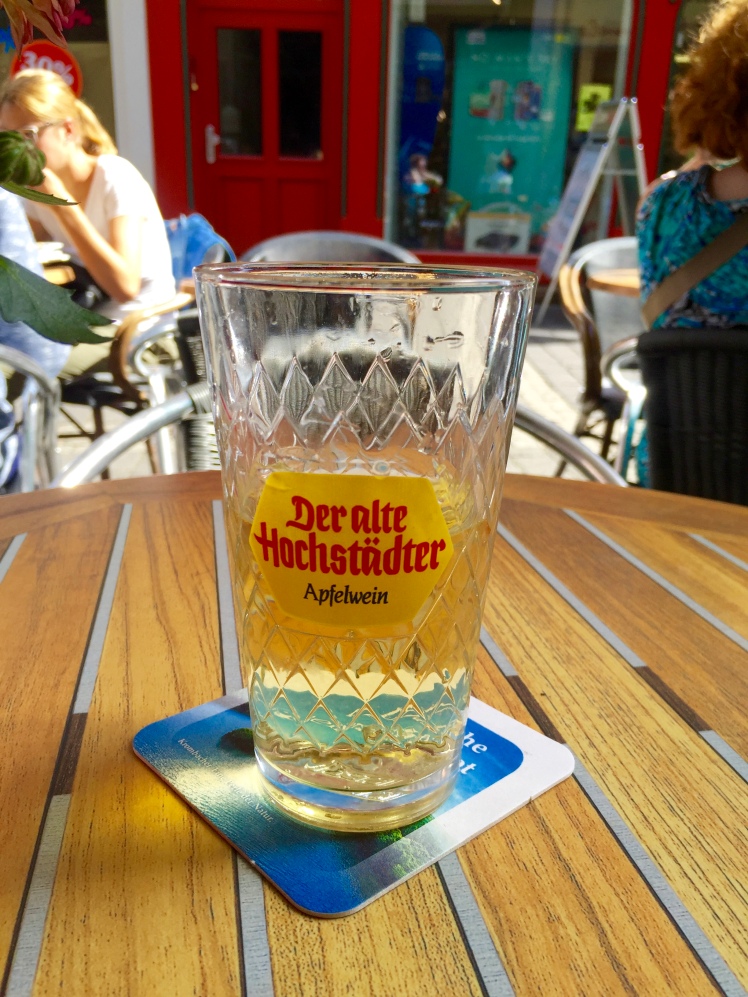 The next day I spent time in Offenbach – the suburb where Daniel and Allyson live – and Frankfurt am Main. In Offenbach, I had a real bratwurst with mustard at a market and an espresso, once again, outside. In Frankfurt, I walked around a plaza that reminded me of the buildings in Marburg, but just in a larger, more open area. 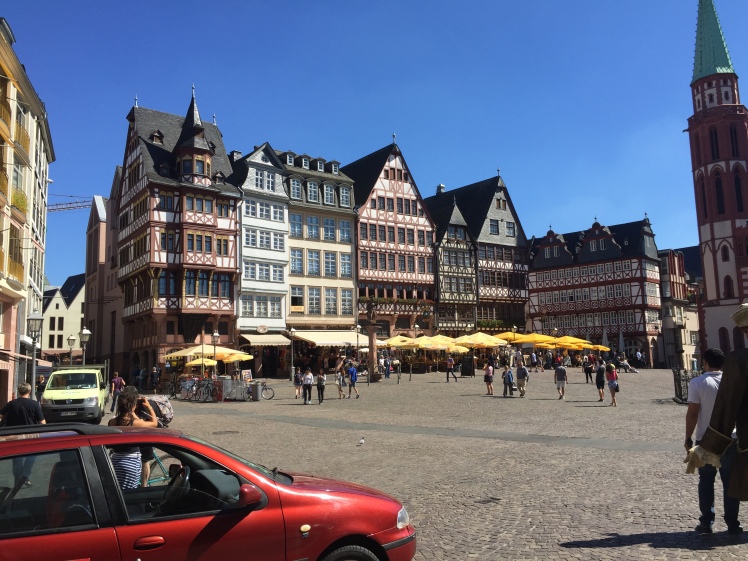 Allyson says that the planners were deliberate in making sure that people who lived in Frankfurt felt a good quality of life. I can’t imagine that being in contemporary urban designers rhetoric. But the feeling was palpable as I walked around the square, grabbing an ice cream and posing by fountains and other German things.

I also got to go inside the Frankfurt Cathedral.

But the evening was my favorite part of this trip. Instead of a rushed meal like we often have in America – twenty minutes feeling like a long, drawn out bore – Daniel, Allyson, and I ate and drank for 2 and a half hours. It was an experience that I can’t believe people don’t try to have regularly, no matter where you live. Sitting around talking about literary analysis, A Christmas Story (sorry guys), bathroom vending machines, and life plans, is the stuff of dreams. I can’t remember feeling so content with everything.

Thank you again to my amazing hosts, hopefully see you at Thanksgiving if not sooner 🙂