Once upon a time, years before I was born, a young boy created a small altar in his closet. After pretending to be a soldier, he would come back to his room and pretend to be a priest. Where would he end up? That depended on his local priest, a Franciscan, who inspired him to take his faith seriously.

He found the army wasn’t for him, and after discernment joined a group of friars in St. Louis – meeting friends he would have for the rest of his life. But here also he met his future wife (and it wasn’t Lady Poverty), a young woman from St. Louis University studying to be a physical therapist.

And while Scott McConnaha left the friary, the mark of the Franciscans would ever resonate with his family’s faith – grabbing hold of his daughter (me!) when she was thirteen and the family had moved back to Wisconsin. She made friends with Franciscan sisters in Manitowoc, joined her family at the Transitus Mass, led groups of girls at the yearly summer camp, and “went to the woods” to read books like The Journey and the Dream.

And then during my grand tour of Europe, the dream of going to Assisi – home of her Confirmation saint (Francis of Assisi) and St. Clare – finally came true. I started off the trip getting off the bus a stop too early and walked all the way across the city with my backpacks, passing the winding side streets, and walking around one block three times before realizing that Google Maps was leading me astray. Tired, sweaty, dehydrated, I rang the bell for the hotel and plopped onto my bed. I showered and consulted my map of where to go in the evening.

But as I turned my key to get out of my locked room, I realized I couldn’t get out. Imagine it like a 1940s black and white comedy if you will. I tried to force the key to turn right, leaned all my weight in the handle, and tried twice more. Nothing. So I walked to the bathroom and got a drink of water. I came back, trying to open it once more – maybe I was turning the handle wrong or something. Nothing. I opened the window and paced the length of my room. Key in again – not turning at all now. Panicked and very hungry, I looked out my window.

But soft! Below my window the hotel restuarant waiter was talking to another guest. When they finished I called down a timid “excuse me?” and explained the situation while hanging out my window. A passerby laughed and called me Juliet (I was just in Verona!). I tossed my key down, and he was able to let me out. Thankfully the hotel took care of the lock while I was exploring the town. 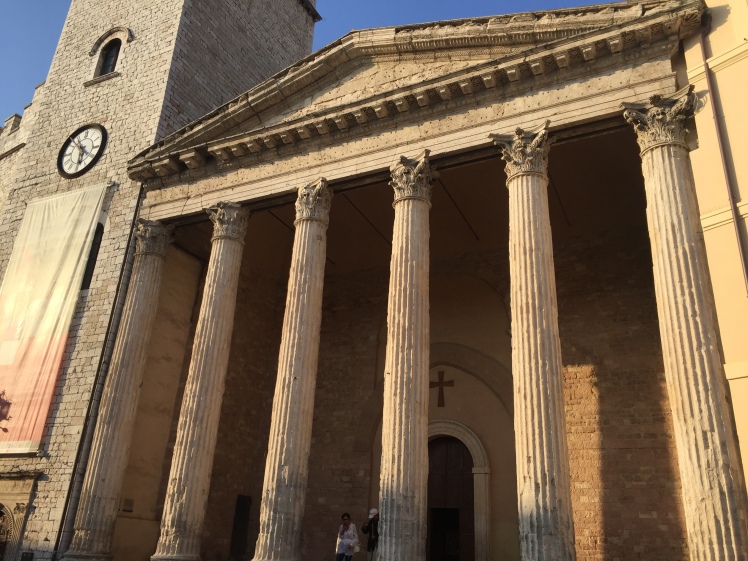 I started off the adventure in the main piazza, following the road down towards St. Francis Basilica. Because restaurants don’t open until 7:00, I visited the church knowing I would be back again the next day. I was absolutely floored standing in the tomb of St. Francis, lying at rest in the presence of his four best friends and companions: Leone, Masseo, Rufino, and Angelo. After that short visit, I saw that tourists were being ushered out of the chapel. At my mom’s suggestion, I ate at a small restuarant near the Basilica ordering gnocchi for the first time ever with a gorgonzola sauce. 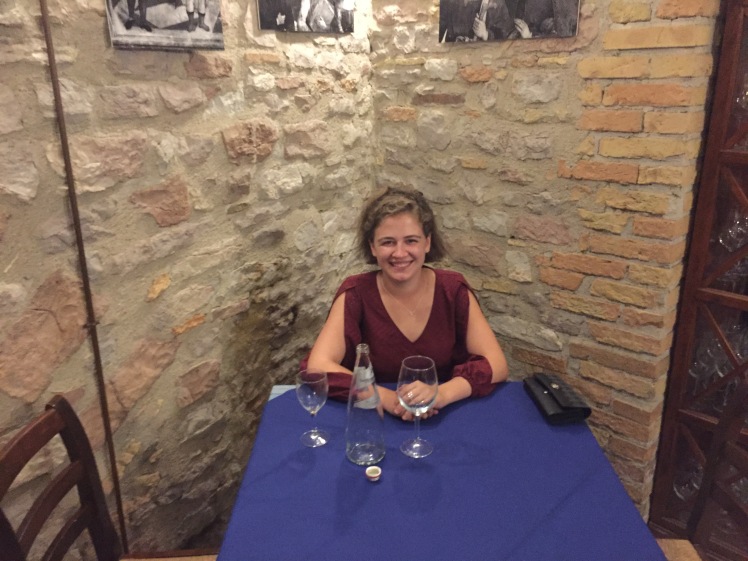 The next day, I started my day at Santa Chiara – St. Clare – Basilica. I saw the original San Damiano Cross, St. Clare’s tomb, relics from both her and Francis, as well as small chapels and altars off the main church.

From there, I made my way to San Damiano Church. I had about an hour before the church was open to tourists, but there was a small olive grove that was right off the road. It wasn’t fenced off, nor was there a “no trespassing” sign, so I sat amidst the trees looking down towards St. Mary of the Angels catching up on my writing and reading the prayer of St. Francis and the Canticle of the Creatures. Once the church and convent were open, I joined a group walking from room to room. I saw where Clare and the Poor Ladies slept, where Francis felt the call from God to rebuild the church, and where the sisters walked about taking care of their daily duties.

I walked back up towards the main city and spent a while in the main square before getting a bite to eat. After lunch, I went back to St. Francis, expecting to get a free walking tour as my German mother explained were available when we were on the bus in Stavanger. Apparently they no longer give these, however, so I walked around the basilica on my own. I saw the tomb again, the lower basilica, and the upper basilica – where my guidebook explained the different paintings in English. 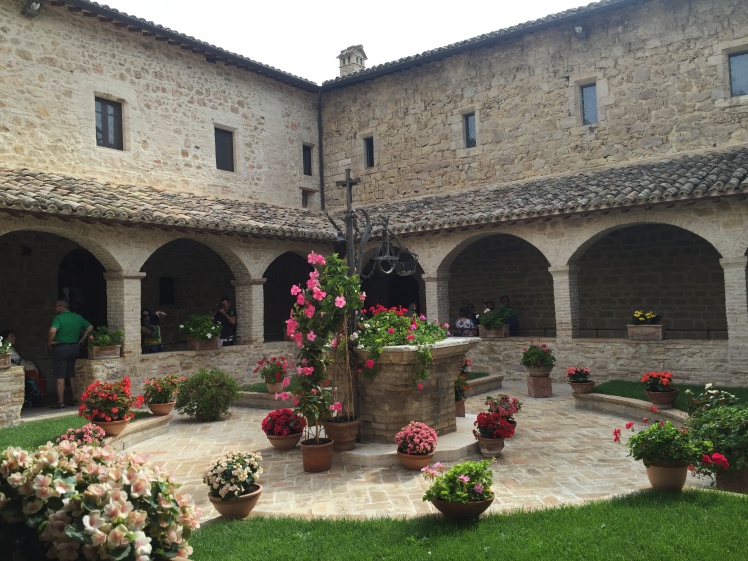 Not expecting to really hike, I walked down towards St. Francis Woodland. I ended up hiking in my street shoes for about an hour, but it was so nice to be on my own in the woods – grabbing a coke at the end and snagging a great photo of the St. Francis Basilica.

After my regular Italian siesta, I had a great dinner at the hotel restaurant. They actually gave me a free champagne on the house! Either the waitstaff were in love with me or they felt very sad that I was alone. Ah well, free champagne for me! 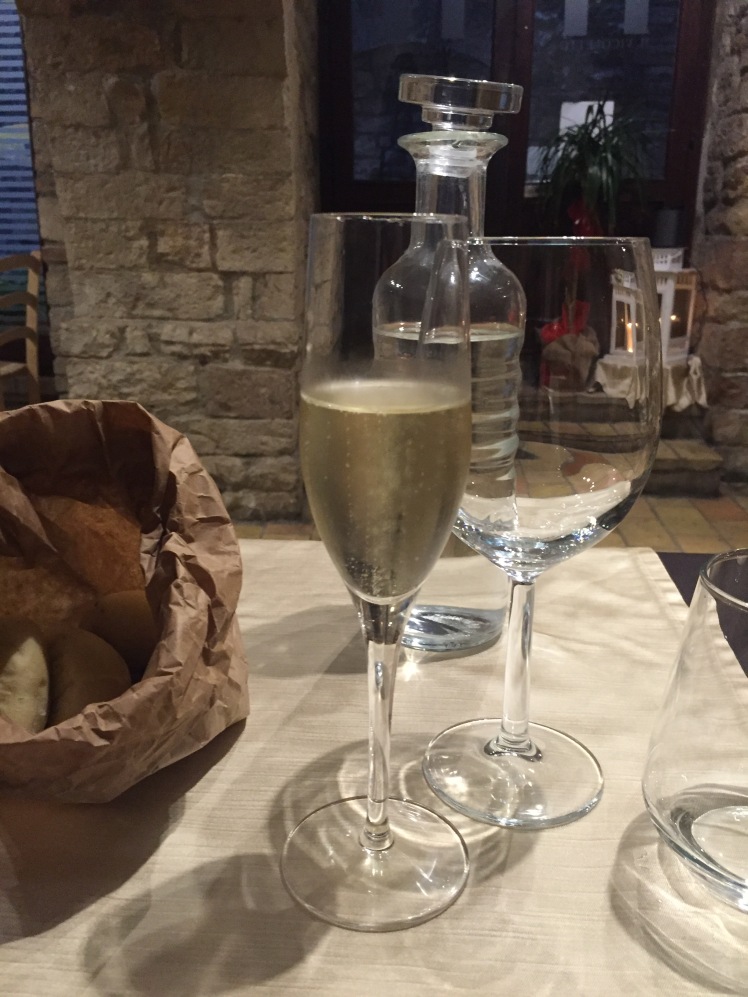 The next morning, I took the bus down the mountain and paid a short visit to St. Mary of the Angels, which houses St. Francis’s Porziuncula, a little church the friars built. Mass was going on at the same time, so I hung in the back.

All in all, I loved Assisi so much. Out of all of the places I’ve been to, Assisi is the place I am most sure of going back to someday. It’s a magical place with history within the very bricks. Until next time, friends!