As I mentioned in my last post, classes here in England really only meet once a week – a lecture and a seminar (one hour each). Attendance is only taken in one of those, and my overall grade will be based on a final essay that I write for each course. So, most of time abroad will be spent getting a more worldly education – visiting places of historical and cultural significance. My first project, or trip, was this past Friday to Dover and Canterbury. Each strikingly beautiful and important in their own way, this was the perfect first day trip from London.

Waking up earlier than I’ve had to, I can’t believe I almost considered spending the free day in bed. Thankfully, I pulled myself out, hopped on my National Express Coach, and made my way first towards Canterbury. 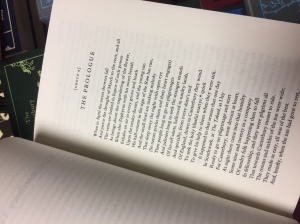 Canterbury is a town in England of both historical importance – it has been the seat of the Archbishop of the Church of England since the church was first established in the reign of King Henry VIII. Before that, it was a major Roman Catholic Cathedral – the site where St. Thomas Beckett was martyred and now buried. In a literature sense, Canterbury is the place of destination for the pilgrims in The Canterbury Tales by Chaucer. When I was seventeen, I had to memorize the prologue to this classic Middle English story – the beginning of which played on repeat in my head as I walked down one road to another. 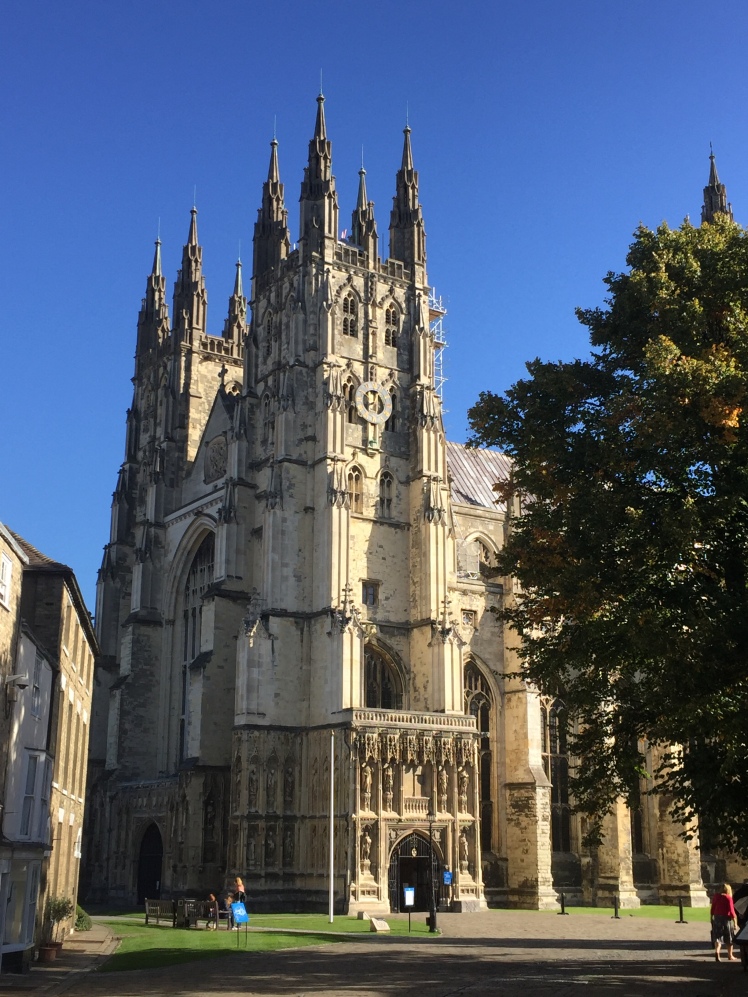 Naturally, I started trip at the Canterbury Cathedral. This church struck me almost as much as St. Vitus’ did in Prague: the sheer grandeur of Canterbury Cathedral is enough to make someone convert to Anglicanism right then and there (I didn’t). I think one of the volunteer guides chuckled at me as I poked my head outside and saw the beautiful courtyard and gave a little gasp.

The crypt was dark and cool – just as a crypt ought to be. Interestingly, on the tomb of one martyr, all the heads of the surrounding statues had either been taken off or never there in the first place. I assume this means she was beheaded, but I’m not sure.

Compared to other churches I’ve been to in Europe, this one was distinctly less colorful. Relying more on the grand and intricate architecture rather than detailed and colorful windows, this gave me the sense of something new. I’m glad – once you’ve seen so many similar cathedrals and basilicas, they begin to lose their wonder to the visitor.

The hallways in the courtyard seemed right out of scenes from Pride and Prejudice and Harry Potter – and anyone who knows me even superficially will know these are a few of my favorite things.

After successfully visiting every room in the Canterbury Cathedral I was allowed entrance to, I made my way down even further in Canterbury to Greyfriar’s House – the former residence of a group of Franciscans in Canterbury. I had seen a photo of this old house on Pinterest (my more online bucket list), and I knew I had to at least stop by. Despite having lovely weather, the house still gave an ominous and perhaps even haunted vibe. I loved that the stream carried on underneath the house, as well as the old bridges that were scattered around the free park. I even took the opportunity to play Pooh sticks – though it was much less fun since my brother wasn’t there to play it with me.

I had an hour at this point before my bus arrived to take me to Dover, but I felt that I was already done with the main attractions of Canterbury. I ended up using the rest of the time just to get a head start on my Shakespeare reading for my next lecture – because, of course, I brought my Shakespeare anthology with me on a day trip.

Dover captured my heart even more fully than Canterbury; the cliffs were more than pictures on Pinterest could ever convey. Not only are they whiter than chalk, they feel like cool chalk as well. I walked along the cliffs to the lighthouse – about 2km each way. It’s incredible just how close a visitor can get to the edge of the cliffs. 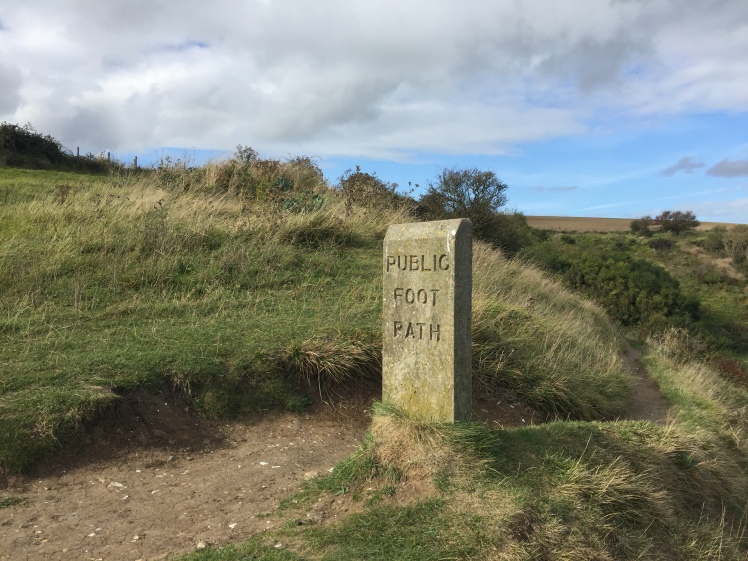 As I got closer, I noticed that there were large holes in the ground; I made sure to watch my steps carefully so that I wouldn’t twist an ankle (or heaven forbid, get stuck forever). Part of the walk was over rough dirt paths cutting the nearby field off from the edge of the grassy cliffs. 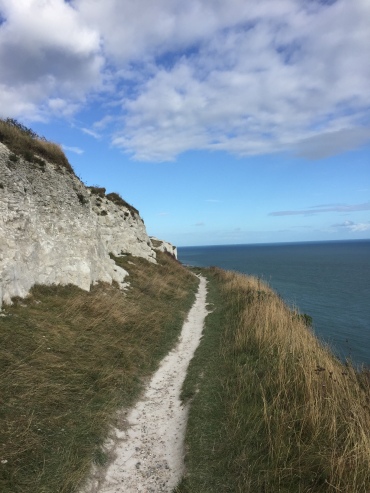 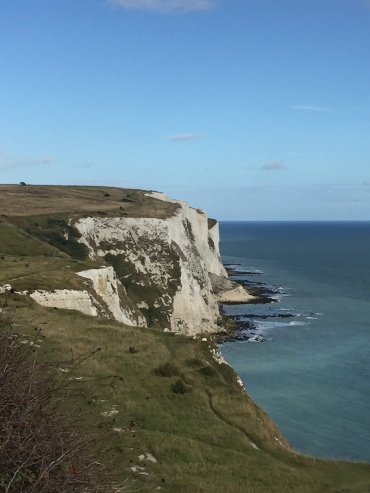 The lighthouse offered several minutes of rest at a small tea shop. It’s exactly how you would imagine an English tea shop: a warm, matronly woman with a white beehive haircut in a frilly apron, surrounded by white and soft pink walls with an arrangement of light wooden shelves displaying all the varieties of tea. I was far too overwhelmed to pick any of those, so I chose a bottle of lemonade that I could drink outside, watching a cruise ship move away from the Dover port towards Ramsgate and Deal. There was a delicious breeze licking the tops of the grasses – perfect for closing my eyes and just about falling asleep.

On the way back, I took more pictures, and purposefully made the walk harder on myself than it needed to be. I didn’t want to take exactly the same path as I had before, so, close to the edge, I walked up a serious a small steps straight up (what seemed like) a vertical face. I’m sure the man walking down the same steps thought I was lost. However, I made it to the top and was rewarded with one of the best views of the day.

By this time it was evening and I had spent three and a half hours walking. With sore feet, I made my way back to Dover to the train station for the short ride back to London. I am very pleased with my first day trip and look forward to my next one: Chawton, birthplace and childhood home of Jane Austen. Maybe I’ll be faster about getting my summary of that trip faster than I was with this one! 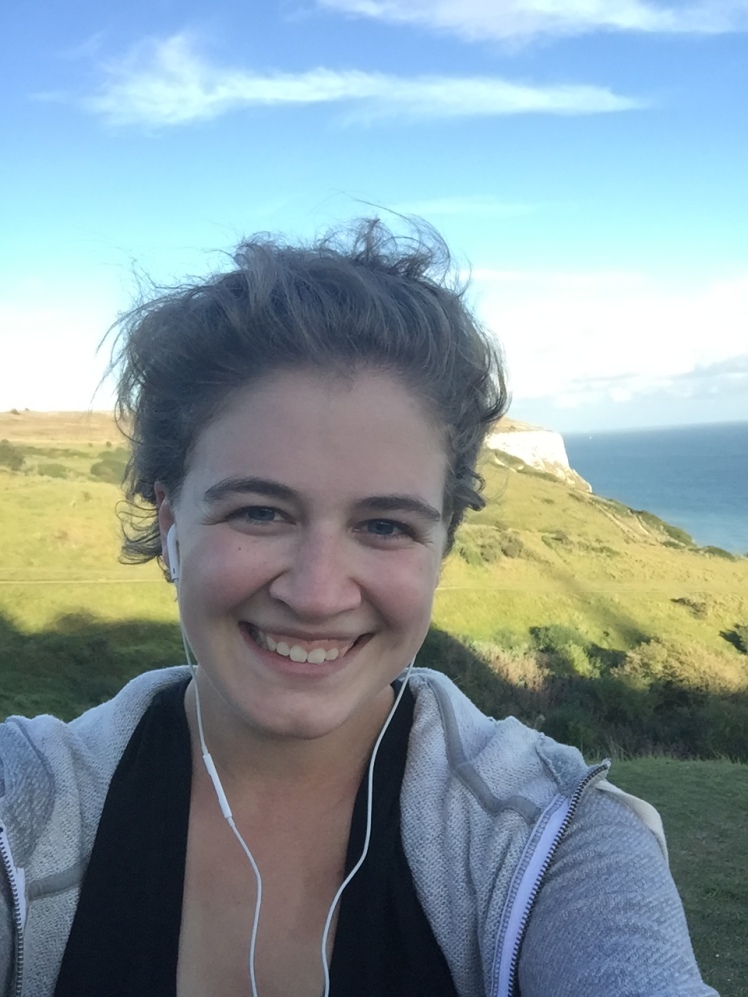